While clearly a historical figure that given enough time will claim the same status as Moses or Mohamed, I have never done any serious study of the man, my knowledge of him was principally through mention of him in high school social studies, and of course the excellent film biopic starring a young Ben Kingsley (which he won a well deserved Oscar for).
Imagine my surprise when researching a quote by Gandhi, that I uncovered clear and irrefutable signs that he was a ‘capital L’ Libertarian!  (Quotes via Wikiquote.)

“I’m a lover of my own liberty, and so I would do nothing to restrict yours. I simply want to please my own conscience, which is God.” January 21st, 1927

“…That State is the best governed which is governed the least.” August 15th, 1940

… It doesn’t get much more Libertarian than that!
And interestingly, while clearly a man of peace, he was not entirely a pacifist… And if he had been an American, he clearly would have supported the 2nd Amendment!

“In this instance of the fire-arms, the Asiatic has been most improperly bracketed with the native. The British Indian does not need any such restrictions as are imposed by the Bill on the natives regarding the carrying of fire-arms. The prominent race can remain so by preventing the native from arming himself. Is there a slightest vestige of justification for so preventing the British Indian?” – March 25th 1905

“Among the many misdeeds of the British rule in India, history will look upon the Act depriving a whole nation of arms as the blackest. If we want the Arms Act to be repealed, if we want to learn the use of arms, here is a golden opportunity. If the middle classes render voluntary help to Government in the hour of its trial, distrust will disappear, and the ban on possessing arms will be withdrawn.” – 1927

Anyone who is scratching their head and wondering why Gandhi would hold this position on firearms (all the while espousing and practicing non-violence) should probably take a long pause…  And meditate on it.
In retrospect it should have been obvious that Gandhi would have held Libertarian ideals. After all, his struggle to free India through civil disobedience and non-violent protest was for freedom, pure and simple. One who holds freedom as most important and above all else, cannot help but fit the very definition of a Libertarian.
With any luck, this will be the first in a long series of famous (‘surprise!’) Libertarians!

The claim of ‘affordability’ is already being exposed as fraud

From the Your Opinion section of SILive.com, “The claim of ‘affordability’ is already being exposed as fraud“:

Not one day after the U.S. House of Representatives passed the “Patient Protection and Affordable Care Act”, my employer announced that their medical insurance plans are projected to increase in cost. This increase is due to changes in the Medicare subsidies to companies who offer health care benefits to its employees and retirees.
In addition, the law imposes a 40-percent excise tax on “high-value health plans.”
Given projected plan increases over time, my employer plans will fall within this threshold. This cost increase will affect over 900,000 employees and retirees in one company alone. Other companies offering comparable health care benefits will be similarly affected.
This ruse of “affordability” is anything but.
The overwhelming majority of American people did not want this bill, yet Congress and the president forged on — not even letting parliamentary rules get in the way of the process.
At what point does our quasi-socialist regime turn full dictatorship — and will the media even take notice?

From the “Letters” section of the March 13, 2010 issue of The Economist comes this quip, with emphasis added:

Moreover, your use of the term “radical libertarianism” was disturbing. While I would not join the mobs at a tea party, I do know there is nothing inherently “radical” about libertarianism. Why cast the philosophy in such a bad light? Free trade, limited government, personal responsibility, the rule of law and free markets are fantastic aspects of Western civilisation. Pity the American libertarian.
Dennis Colasurdo
San Diego
http://www.economist.com/opinion/displaystory.cfm?story_id=15660655

Libertarianism is often thought of as radical – case in point being the blog, The Radical Libertarian, the tag line of which reads “we reject all forms of government.”
That position is not shared by many Libertarians, who believe that limited government has a role in society, and that freedom does not require (or equal) anarchy.
That being said, such a position is not without challenge, as posed by The UK Libertarian, who write in their post, “Limited Government (minarchism) is not ethically consistent”:

[L]imited government, of the kind argued for by many libertarians, is a dead end. I’m talking about the people who argue that a government’s sole functions should be to provide national defence, policing, and the courts.

The problem with the argument posed by our friends across the pond is their repetition of the mantra, “The government uses its guns to take money from people by force and then redistribute that money…” If government truly exists at the will of the people, it does not have the right to force the people to do (or give up) anything. If the government does that nonetheless, it is not a government, it is a tyranny.
The Libertarian challenge is in creating a government that can have necessary powers to protect personal and economic freedoms without sliding down the slope of tyranny. No one says such an effort is easy, but it is also not impossible.
Don’t pity the American Libertarian for trying; rather, support his cause.

From the article, “NY tax refund checks not in the mail” (The Business Review), with emphasis added:

New York state has temporarily stopped issuing income tax refund checks, hoarding money to help the state pay more than $14 billion of bills due this month.
Refund payments will not resume until April 1…
State law caps the amount of refunds paid from January through March every year at $1.75 billion.
This year, for the first time in a decade, Gov. David Paterson lowered the cap to $1.25 billion to preserve the state’s cash flow. The state hit that lower cap on March 12…[Governor David] Paterson has warned for a few weeks now that the state lacks the funds to pay all of its estimated $2.2 billion of bills due this month, which include everything from Medicaid reimbursements to benefits for state workers.

Happy days in Albany, for sure.
Albany’s fiscal irresponsibility
Since 1999, total government spending in New York State has risen from $62.2 billion to $112.5 billion — an 81% increase– as shown in the chart below. 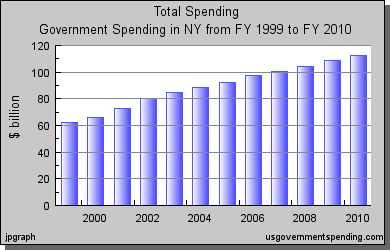 Granted, due to inflation, a dollar in 1999 was worth more than a dollar in 2010. Despite that, even when counting inflation, state spending has increased by 47% in the past 11 years.
But state population has gone up since 1999; shouldn’t that make things look better? Sadly, no; spending per person in inflation-adjusted dollars has still gone up by 43% since 1999. (Source: usgovernmentspending.com)
Final scary number: total public debt has gone from $76.56 billion in 1999 to $123.04 billion in 2010.(Source: usgovernmentspending.com)
The verdict: New York State is spending 43% more per person today than it was in 1999, and has increased its total debt by 61% in the same time span. For those that have lived here in that time period, would you say that living conditions in New York State today are twice as good as they were in 1999, since our combined spending and debt obligation has roughly doubled? I doubt it.
In layman’s terms: Imagine you were earning $50,000, spending $50,000, and had a $40,000 mortgage. If, eleven years later, you were earning $90,000 a year, spending $90,000 a year, and had a $74,000 mortgage, would you say you were on the path to success?
Only someone from the Albany legislature could say “yes” to such a question.

Agenda for the Annual Convention

The following initial agenda is set for our first Annual Convention:

If you plan on attending the Annual Convention, please notify us!

To be a member of the SILP

To be a member in good standing, you must be a member of the LPNY. Membership in the LPNY requires that you have paid party dues ($25) on or after Sept 1, 2009.

Saving $1,900 per tree (or: a brief lesson in government inefficiency)

Sometimes, one sentence can show how government is ill-suited to provide certain products and services.
From But only Parks can price a tree, SILive.com, March 3 2010:

The Parks Department charges $1,900 to plant one 8-inch sapling, and usually takes months to do so; builders who testified before the Council said they pay anywhere between $300 and $500 to purchase the same tree.

A quick Google search turned me on to Musser Forests, a tree farm in Pennsylvania, that sells 3-year red oak seedlings (3- to 5-feet tall) for $6.59 each (minimum purchase: 5). Add in shipping, and it’s still only $15.09 per tree. Want your trees shipped in two days? Only $31.59 per tree.
Granted, a 3- to 5-foot sapling is a bit smaller than what is usually used as a replacement tree (about half the size), but oak trees grow about two feet per year.  Is two years of tree-growth worth saving nearly $500 — or, as it is with the Parks Department, $1,900?