Who makes minimum wage, and what we should do about it

Thanks to the Political Calculations blog (The Economic Detective: Prime Suspect Revealed), we can see who is actually earning those minimum wage salaries. 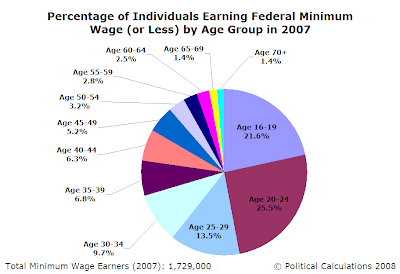 Look closely and you’ll see that just under half of all minimum wage workers are under 25 years old. In other words, many people who earn minimum wage are working part-time (students) and people with little or no work experience.
It’s not uncommon to hear people complaining that minimum wage is too low. According to many of those complainers, minimum wage is not a living wage – that is, as per Wikipedia, “the minimum hourly wage necessary for a person to achieve some specific standard of living.” Often this is extended to the complaint that “you can’t raise a family on minimum wage.”
I always felt there should be a minimum wage. The minimum wage for any worker in any sector should be $0. It should be illegal to pay anyone less than zero for their services. Above that, the market (that is, employers and workers) should decide, based on what’s appropriate based on their respective wants and needs.
How can I say that? What about the living wage, and people trying to support families on minimum wage?

“[T]he company couldn’t increase the price of the bows to offset the higher labor costs without losing sales, so the company was forced to move production to Mexico, and now more than 200 Missouri jobs have evaporated – largely thanks to the minimum wage.”
CARPE DIEM: How Minimum Wage Caused 200 Jobs to Evaporate

First, the aforementioned graph already illustrates that a substantial majority of people making minimum wage are younger than 25. The U.S. Census reports that the average age of women giving birth for the first time (in 2004) is 25.2. If you’re 25 years old, you have a 13.5% (or less) chance to be making minimum wage.
Second, according to a 1994 study by the Employment Policies Institute, as reported by the U.S. House of Representatives, “only 1 percent [of minimum wage earners] are heads of households.” In other words, the minimum wage does little to directly impact 99% of the heads of household.
Third, we must remember that a government-imposed minimum wage is an artificial benchmark of the cost of labor. By setting a minimum wage, government draws a line in the sand that companies can use to determine what they should pay low-skill workers. If the minimum wage is too high, companies will be less compelled to hire more workers or to pay them more than the minimum. If the minimum wage is too low (or nonexistent), companies will offer a salary based on what workers demand in order to take the job. In a market-based wage system, employers and employees are empowered to negotiate and compete for each other’s services. As a result, even without a minimum wage, a “minimum” will exist – the minimum being the amount of money someone is willing to take to provide a service.
Fourth, we mustn’t forget our obligations as an individuals, citizens, and parents. If you can’t provide for children, don’t have them – or put in the effort to increase your standard of living so you can provide for them. In America, there are so many opportunities that can be met if you take the initiative to reach for them. 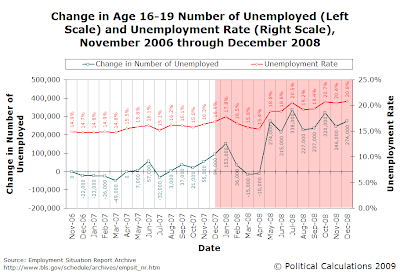 Fifth, any government-imposed minimum wage can reduce the employment opportunities for low-skill and entry-level workers. Fortunately, we have recent history to show some correlations between minimum wage increases and higher unemployment for entry-level workers. Political Calculations gives us the following graph from their article, The Third Leg of the Recession?.
What makes the graph interesting is the dramatic increase in unemployment for entry-level workers (those between 16 and 19 years old). Yes, some of these losses can be attributed to the economic downturn. However, the graph exposes a dark reality about minimum wage laws, exemplified by the following story.

Tom, Dick, and Harry work at the local grocery store, each working 20 hours a week and earning $5.50 an hour – 35 cents more than the government-mandated minimum wage.
When the minimum wage is increased to s5.85 an hour, each worker enjoys a 35-cent per hour raise, but also finds their hours are reduced to 19 hours a week.
When the minimum wage is increased to $6.55 an hour, Tom and Dick enjoy the additional 70-cent per hour raise, and they both see their hours increase to 25 per week. Harry, unfortunately, loses his job.

If you artificially raise the wage for one worker, there is the potential for other workers to suffer. A smartly-run business will allocate time and money to get the work needed as efficiently as possible, within a fixed budget. Increasing an artificial minimum wage does not generate new sources of money for the business; instead, it simply reallocates money less efficiently than the market will do on its own.
Maybe government shouldn’t allow workers to be laid off, or hours cut, due to minimum wage hikes? Let’s consider the same Tom, Dick, and Harry if the grocery store owner was not permitted (by law) to fire or cut the hours of workers.

That’s right: A mandated minimum wage can increase salaries for those at the lower income levels who don’t lose their jobs, and block potential employment for others. Tom, Dick, and Harry enjoy an economic windfall; the guy whose job disappears as a result enjoys an economic depression.
In conclusion…
There will always be people who fall through the cracks, and always be exceptions to the rule. This is where friends, family, and communities come in. When someone you know helps you, you’re compelled to appreciate the help you’re given and not take advantage of it. When government helps you, you’re compelled to game the system for your own personal benefit.
Less government + More personal responsibility and empowerment = long-term positive results for everyone.